I purchased my store in July 2011. At the time it was a failing tabletop game store. With a little luck and a lot of hard work, we diversified it and turned it into a successful thing. I operated quite happily, but aside from a few excellent blogs I didn’t pursue any professional development or relationships with other retailers. I was on my own little island, doing my thing.

In mid-2015, the loneliness got to me and I started wondering if there was more. I joined the larger retailer social media groups. I friended a boatload of retailers on Facebook. I started attending trade shows. This felt great! I was around my people! Turns out that most of my people were broke, but that’s okay! We could all learn from each other! I was sure that at any moment I’d be introduced to all the folks who were making great livings doing this.

What I discovered as I visited other stores and talked with other retailers was that operating on my professional island was absolutely the best thing I could have done when starting out. The inefficiency of “reinventing the wheel” doesn’t look so dumb when the existing wheels are mostly triangular, seemingly designed to cause maximum resistance to movement and momentum. As we struggled through those formative years, there were a ton of nearly industry-ubiquitous mistakes that I was too ignorant to make. There are entire retail categories and activity classifications that I examined early and dismissed as impractical. Something something, the road less traveled by, and all the difference, etc.

When I started stepping into other game stores and talking to other retailers, many of them expressed shock that I would just ignore some of the things they had been told were essential to the operation of a successful game store. At first this threw me into a crisis of confidence: What if I was completely wrong? I mean, I’m making money, but what if I’m holding myself back from much wider success by not following the examples of others?

As I look back on the last two years of industry engagement, I’m left with what I believe to be the following unhappy truths:

Many of the above truths merit blog posts of their own. 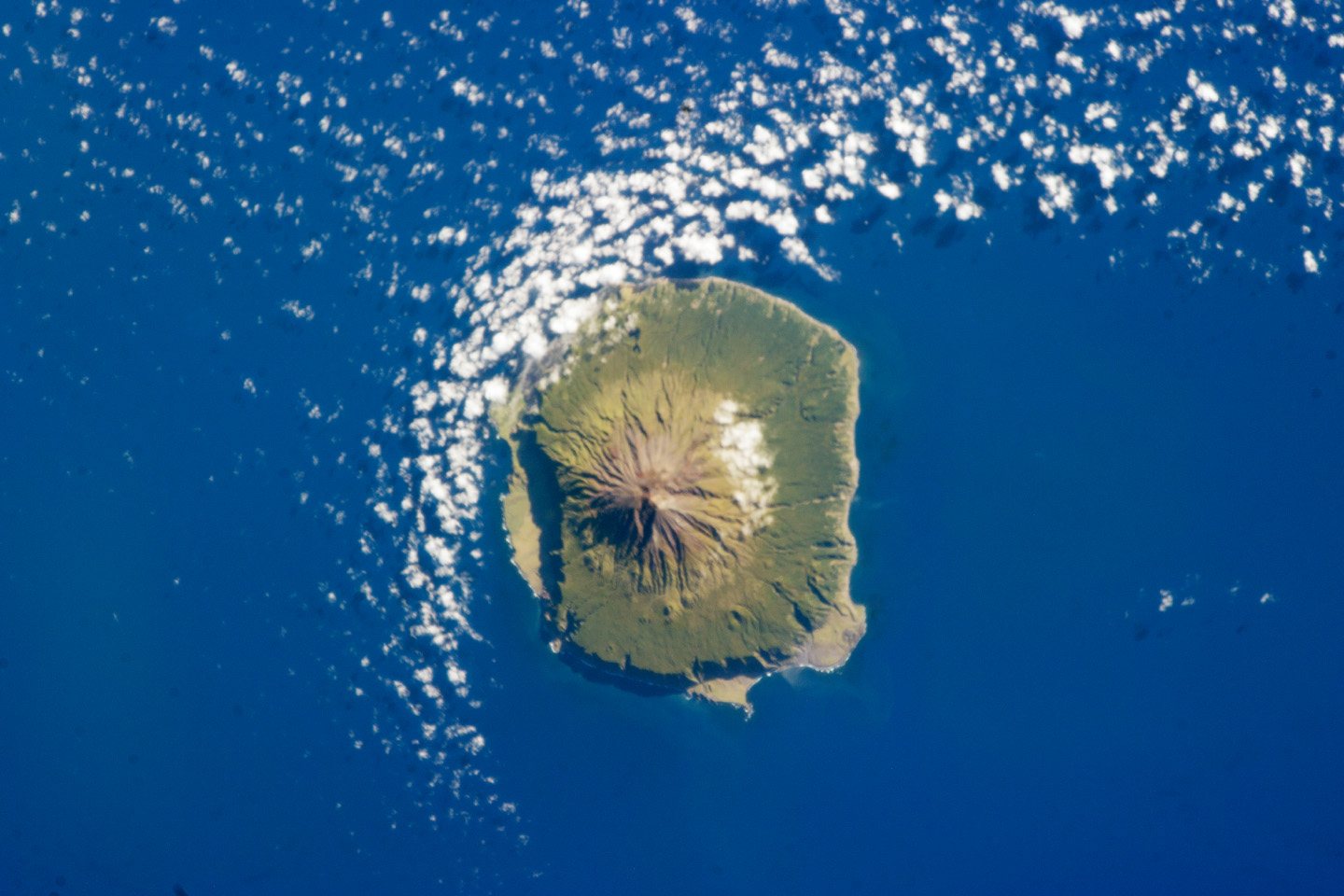 Tristan da Cunha, part of the most remote inhabited archipelago in the world. Photo taken from the International Space Station, and in the public domain.

About a month ago, I began the process of moving back to my island. Here’s what it looks like for now:

I’ve left most of the industry retailer groups. I’m still a member and admin of the Hybrid Theory group for retailers running hybrid stores or looking to hybridize by adding Video Games, but I’m less active. All I was doing in the larger groups was fighting with bad retailers. I told myself that I was being a voice of reason for the new retailers who were watching, undecided about whether they should be professionals or not. Ultimately, even if that was true, it didn’t benefit my business, and I don’t believe that it added much more than entertainment value for many of the bystanders.

I’ve cancelled any plans I had to attend future trade shows. I’m not averse to attending them, but the shows are all for tabletop retailers and I think that I’m a distraction there: Popular, perhaps, but not useful. If someone pays my way to one and gives me something interesting to do, attending them again isn’t out of the question.

I’ve also cancelled most plans that I had to visit other game stores. I’m still willing to visit your store and help you with anything I’m qualified to help with. Unless you’re my friend, I will probably ask you to pay for my travel expenses or time. If you’re my friend on Facebook, you qualify for the buddy exemption. If I’ve offered to come to your store for free and you’re still interested, reach out to me and I will still make it happen.

In summary, I’m choosing for now to return to my professional island and work quietly there to make a better life. I’m curtailing all professional activities that don’t make use of my core competency of having nothing to lose. Things could change. Nothing is written in stone except for the imperative that I make a good living without going crazy, but I have to remember that enriching the community is not the same as me being enriched. I’m going to be a little more selfish moving forward.

Today I’ll show you how we store discs for used disc-based games. We’ll start with a tour of the system for selling a game, and then I’ll give you a process instruction list for use in your store. Then I’ll give you links to the supplies you’ll need, then we’ll talk about the advantages and challenges of this system.

Process for selling a disc-based game:

Dragon Age: Inquisition. For eight bucks, this is a lot of entertainment! The case is displayed empty, of course.

On the back of the case is a label with a number written on it. We should find the disc in envelope #938.

These cabinets behind the counter hold all of the envelopes. I see in the photo that someone has used their foot to close one of my very expensive drawers. Hmm.

After the discs are removed, the empty envelope goes into a giant unsorted pile of empties and is available to use again.

The most common failure of this system is caused by human error, usually by someone new who thinks that they can improve the process by numbering multiple games at once. The biggest downside of this system is that errors are catastrophic: That is, if you have four thousand discs in numbered sleeves, and a customer brings a game case with the wrong number or no number at all, you are totally hosed. When you’ve got only a few hundred games, you can spent a while sorting through your envelopes and eventually find it. At any volume, that process breaks down and it’s hard to make a customer understand that the $3 game you said you had in stock IS in the cabinet someplace, but they can’t have it. Bad.

If someone shoplifts a game case, we don’t have an easy way to recover that case’s sleeved disc from the cabinet. This means that we probably have a few dozen orphaned games in the cabinet. I’ve learned to be serene about these sorts of inefficiencies, knowing that a perfectly-solved system would probably cost me a lot of time that I’d rather use making money.

There are variations that I’ve seen on this process, like keeping a separate numbering scheme for each console category. This lowers the number of envelopes to sort through when an error occurs, but I feel that it also adds more complexity to the process of putting trades out for sale.

There’s other ways. In high school I worked at a game store that had clear plastic CD cases on racks behind the counter. When we put out trade, we’d write the game name on the edge of the CD case and rack it in alphabetical order. Re-using the cases involved copious amount of solvents, and was the primary reason behind the added expense of a linen service at the store. It was time-consuming and required a lot of space. I was recently in that store. They’ve switched to the numbered sleeves.

It’s not a perfect system, but it’s good enough, and it scales reasonably well. It’s one of those things that I’ve been doing so long that I take it for granted. Thanks to those of you who asked for a post about it.